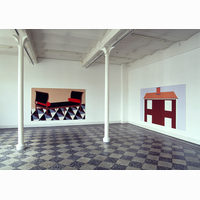 Pressemeddelelse: "For OVERGADEN, Anette Abrahamsson has created six (tempera) paintings: three interior images; two portraits, and one depicting a house. The portraits are small while the other four are very large in format.
The house is closed with shutters and depicted without its foundations. There is nothing around it, neither trees nor humans. In this sense, it floats mysteriously in the air with no means offered to enter it.

In the interior images a couch, some barstools at an empty bar, and a Jacuzzi are to be found. The rooms are tiled, giving them the feel of a hotel rather than a domestic touch. Although the elements of the interiors seem to belong to different time periods and different spatial spheres, there is one common characteristic: all the interiors are deserted. There are no imprints on the couch, nor glasses or ashtrays in the bar, and no wet footprints on the floor in front of the Jacuzzi. There is not a single sign or trace of human beings. Instead, the interiors appear as being in a “human vacuum”.

In fact, Anette Abrahamsson attempts to depict an empty space – a vacuum. More precisely, she wants to construct a narrative vacuum as the title indicates. In and of itself, this is not unproblematic: presenting something figuratively and at the same time claiming that nothing is narrated. Abrahamsson is aware of this and with the exhibition she occupies this problematic field. The story is made inapproachable or even absent in the paintings that in this sense appear as “narrative vacuums”. This does not imply, however, that the story remains absent in the exhibition.

In the interior images, the human absence has a radical effect, since the objects apparently imply human presence or even gathering: the couch, the bar, and the Jacuzzi all point to human reaction or recreation. As mentioned, these images are bound together by the tiles, a detail that inevitably directs the viewer’s attention to the tiled floor he walks on in the exhibition room. A connection is thereby made between the interior images and the room of the viewer, suggesting that the absent action might be found outside the painting. In the “narrative vacuum”, the absent narration is made present through the viewer.

As mentioned, the exhibition contains two portraits. In both, the heads are turned away so that the faces cannot be seen. They are depicted in the same kind of vacuum surrounding the house. Just like the house, the faces subvert being captured. They are incomprehensible. Therefore, the people portrayed do not add any narration to the exhibition. Rather, they seem to be static portraits to be found in the same room as the couch. The people do not express a presence, because they literally turn their faces away. Nevertheless and unavoidably, they give the exhibition the human depiction that is deleted from the interior images. In this sense, a human interaction takes place in the exhibition, partly by way of the portraits turning away from the exhibition, partly by way of the viewer who in this process has to turn himself towards the exhibition."