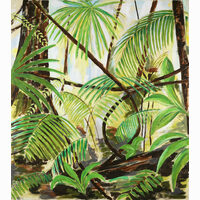 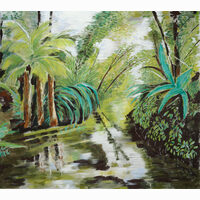 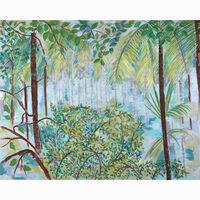 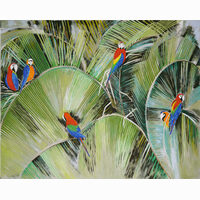 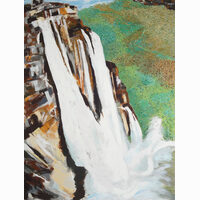 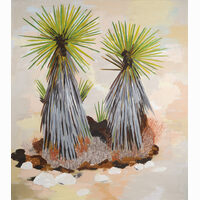 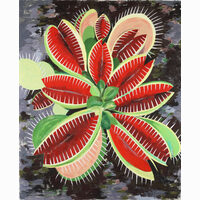 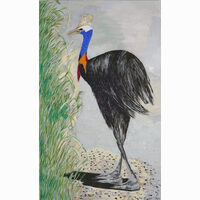 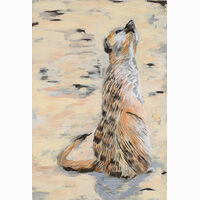 The “Escapisme” series takes its mark in pictures that have been downloaded from the Internet. What we have here are photographic source-models, which could sooner be said to be images of a “National Geographic” quality, that is to say, excellently rendered nature-images of plants, animals and landscapes, in contradistinction to the more close-up snapshot-like holiday images. As the title indicates, this is a matter of escapism, in much the manner of escapism’s form you experience when surfing the Internet, where you can set out for exactly the destination you want, through the interminable stream of images. Abrahamsson takes us along with her to the rainforest and the desert, and depicts – from a Nordic perspective – foreign landscapes and animals that enthrall us with their beauty, but also hold a certain danger: the carnivorous plant, the hidden bird spider, crocodiles in the river, the hunting animal, etc.

“Escapisme” was created during the “Covid” period, which for many people represents a period of relative isolation. The dream appears to be a strong element in the series, and one gets a sense about the intense effort made in the studio that lays behind this series. Through both her brushwork and her composition, Abrahamsson seems to be taking a step further from “Patio” in a form of neorealism that which very well may have characterized her output for many years, but which now attains new heights with the isolated figures, the brushstrokes and the composition’s cropping. The postmodern intention, however, is being sustained. It’s still a matter of simulacrum, taken directly from the Internet's surfeit of copies’ copies, and Abrahamsson’s paintings are still based on an ideological construction. “Escapism” takes the paintings to a new place, both in the motivic sense and in the painterly sense, thus demonstrating an experience and a certainty in both theory and method, and displays Anette Abrahamsson’s long-standing tête-à-tête with painting over the course of several decades.